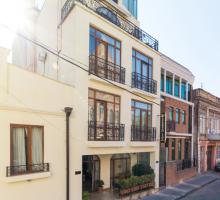 In November 2015  Hotel “City” hosted a delegation from ENAT and took part in the 3rd International Conference "Accessible Tourism – for Social Inclusion and Economic Development" in Tbilisi, Georgia. The event was held under the auspices of the Tbilisi City Hall, with the support of the Georgian National Tourist Authority. It was organised by the NGO “Accessible Tourism Center PARSA”.

ENAT and NGO PARSA had previously held International conferences and training sessions in Georgia on the theme of Accessible Tourism, thanks to a grant from the European Commission’s EuropeAid programme.